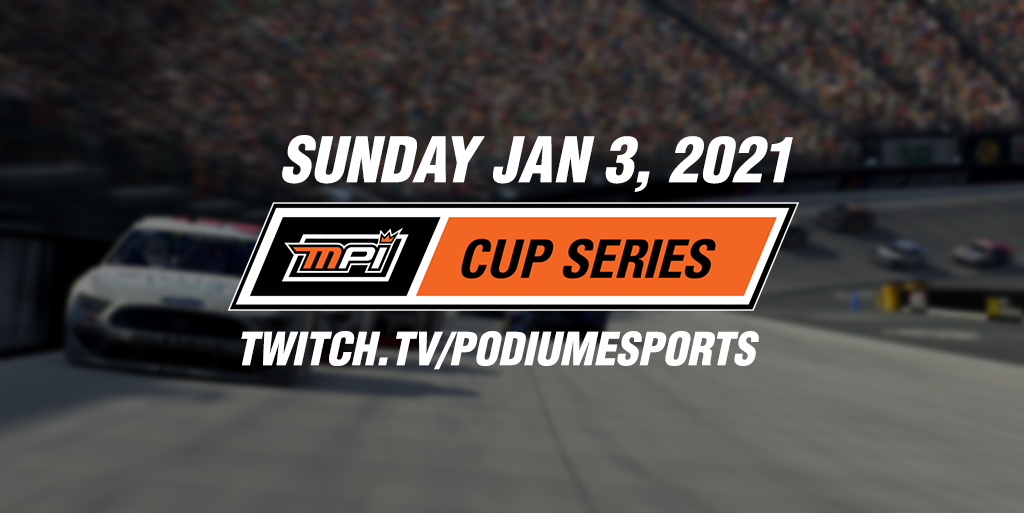 CHARLOTTE, N.C. (Dec. 29, 2020) – Podium eSports has announced that the MPI Cup Series will air on Sunday nights in 2021 on Twitch.tv/PodiumeSports, beginning this Sunday, Jan. 3 with the TechHub TV 200 from the virtual Las Vegas Motor Speedway and running through June 6.

The MPI Cup Series focuses on longer races and challenging tracks across the United States. Most MPI Cup Series are close to or equal to the lengths used in the NASCAR iRacing Series. It features a 16-driver playoff field and prizes from Max Papis Innovations.

“We are excited to join Podium eSports’ lineup of programming as our league grows and expands,” said MPI Cup Series co-owner Dakotah Curtis. “Between our partnerships with MPI and Podium eSports, we can bring excitement to screens of iRacing fans around the world.”

Podium is known for their quality and realism they bring to sim racing and we are thrilled to partner with them,” said MPI Cup Series co-owner Steven Kurpell. “We are excited to take the next step as our series continues to grow. We look forward to seeing everyone on track in January for the start of the season.”

“We’re excited to have another full-time Class A stock car series at Podium eSports,” said Podium eSports Chief Creative Officer Gary Sexton. “The MPI Cup Series team sought out us as a broadcaster early on in the process, which was a major statement of intent that impressed the entire Podium eSports team. We hope that this partnership allows the league and Podium to both grow further in 2021.”